DocFest, Inc. was conceived in 2013 by Chris Walker and Ashley (Tamar) Davis, both alumni of Houston’s Kinder High School for Performing and Visual Arts (HSPVA), to honor the career of Robert “Doc” Morgan, HSPVA Director of Jazz Studies (1976 – 1999) and music department chair (1978 – 1992). Under Dr. Morgan’s guidance, the HSPVA jazz program became internationally known as an exceptional model for the successful training of young jazz aspirants, a reputation continuing today under the supervision of Warren Sneed, himself an HSPVA alumnus. The program’s effectiveness is evidenced by the many alumni currently enjoying significant international success, including pianist/composer Jason Moran (recipient of a 2010 MacArthur Foundation “Genius Grant”) and pianist/composer Robert Glasper (recipient of four Grammy Awards and an Emmy Award). 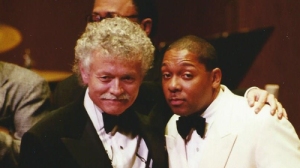 The Mission of DocFest, Inc. is to support higher education for HSPVA alumni. This is primarily accomplished by an annual series of benefit concerts/reunions/jam sessions featuring successful HSPVA graduates and additional renowned artists. In consultation with Dr. Morgan and his wife, Helen, it has been established that funds generated by DocFest will primarily be dedicated to the Helen and Bob Morgan Jazz Scholarship Fund at New York’s New School for Jazz and Contemporary Music, endowed by the Morgans (with assistance from SBC Foundation) in 1999.

As DocFest matures, it is anticipated that additional beneficiaries will be considered (for example, there are also Morgan endowed scholarships at the University of North Texas, Berklee College of Music, and University of Illinois), and, indeed, recent substantial contributions have been made to the Morgan Scholarship at North Texas, as well as to HSPVA Friends to support current HSPVA jazz activities.

As a prominent component of DocFest, Inc., the Board of Directors voted unanimously in 2014 to establish the HSPVA JAZZ HALL OF FAME, members to be highly successful and prominent alumni of the HSPVA jazz program, as selected by the Board.  Recipients will be inducted annually at DocFest, and, in most cases, will headline their respective DocFest concerts. END_OF_DOCUMENT_TOKEN_TO_BE_REPLACED

Empower us to drive the development of new knowledge and new forms of expression in the Arts.